Kapwing Video Converter works along with a built-in video editor. Despite the traditional uploading method, you can paste an image or video URL to import a file as well. Later, you will be in the Kapwing online editor by default. Here you can add text, insert images, customize the timeline, add a scene, and add audio/subtitles/elements. After that, you can use Kapwing to convert video to audio MP3, and other formats.

Kapwing releases an application for mobile phone users. You can access online editing tools to make images, animated GIFs, edit videos and convert Kapwing videos. You can get more features from the online kapwing.com. But the Kapwing Android app still needs to be improved. The Android display screen cannot hold so many filters. 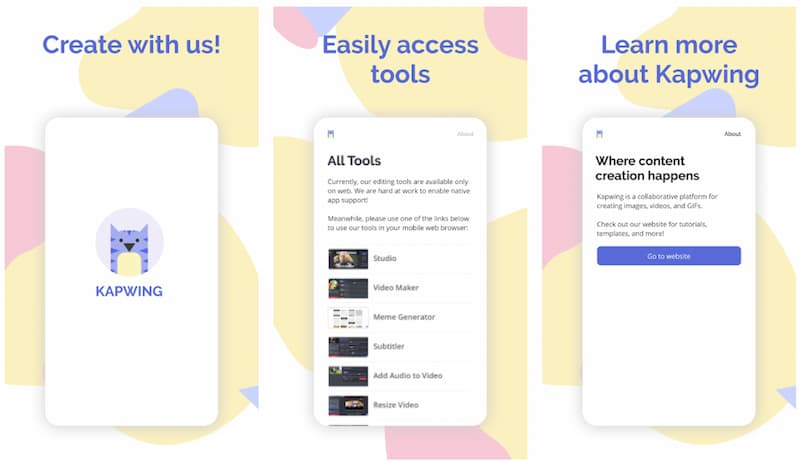 Here are the main advantages of Kapwing Video Converter. If you need a certain function, then you can choose Kapwing’s converter.

There will be no watermarks in the Kapwing free version. In the past, you need to pay to remove watermarks from Kapwing videos. But now you can get watermark-free videos with Kapwing Video Converter at no cost.

All Tools Are Accessible

There is a free screen recorder within Kapwing convert video tool. You can record the computer screen, built-in or external camera, and audio based on your need.

In the free Kapwing Video Converter plan, you can convert files up to 250MB. The exported video length should be less than 7 minutes long. All video editing and converting tools are free to use. Thus, it is a good choice to convert Kapwing video to MP4, MP3, and other formats with individuals. Though the Kapwing Pro or Teams plan charges $17 per month. 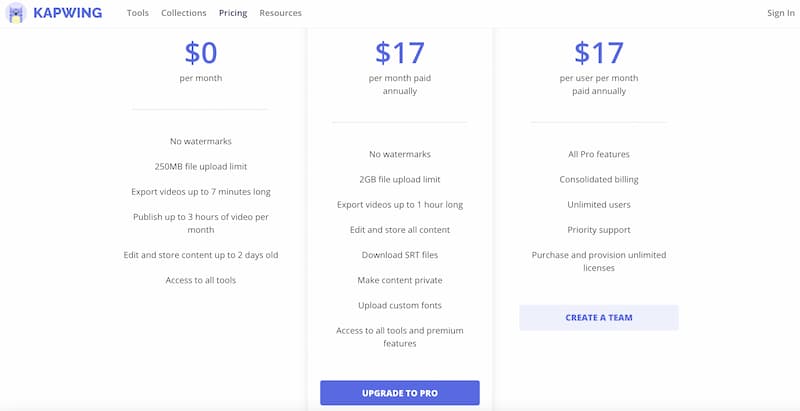 May Lose a Bunch of Your Work

There are some glitches in Kapwing online tools. For example, the Kapwing video exporting process is slow. Kapwing Video Converter may be stuck for hours occasionally.

Though the Kapwing Video Converter has an intuitive interface, the Lapwing video editor is a bit clunky. Beginners need to spend some time to be familiar with Kapwing tools.

Aiseesoft Free Online Video Converter is compatible with popular video formats and digital devices. You can get offline playback by changing a supported format for free. If you want to convert video to MOV, AVI, WMV, and other Kapwing Video Converter not supported formats, you can take a look at the Kapwing converter alternative.

Zamzar is more than a free online video converter. You can convert images, documents, and other files for free as well. Though Zamzar doesn’t provide powerful video editing tools, you can finish the online video conversion in 3 steps quickly. Besides, you can send an email with the attachment of the converted video files.

Onlinevideoconverter.com is an unstable video downloader and converter. You can convert online videos to MP4 and other formats from YouTube, Facebook, Twitter, Vimeo, and many other platforms. However, you may be notified with Your connection is not private.

Can you trust Kapwing Video Converter?

Yes. Kapwing Video Converter is an online tool with conversion and editing features. There is no virus or ad to use it. You can rely on it to convert video to MP3, GIF, MP4 or JPG online.

No. In its free version, there are250MB file upload limit and 30-minute export limit. Even if you log in to it, you can only remove watermarks from the 3 files.