According to the survey during the pandemic, many people are bored in their houses because they cannot leave their homes without a good reason. With that, some people decided to be online steamers, some sell online, and some are teaching online. So, if you are one of the people who becomes an online streamer, the question is, do you have recording software that you can ideally use? If you have, is it reliable? If not, do not go anywhere because we will present Xbox Game Bar Recorder to you. It is only for Windows 10/11 users, and it is not difficult to use, unlike what you expect. For that reason, let us learn more about this built-in recorder feature. Read now.

Pros
It has a unique and easy-to-use interface.
It is free to use.
It is a built-in app for Windows.
It has a customizable UI.
You can post to look for a group in the multiplayer title and initiate a Game DVR recording.

2. What is an Xbox Game Bar Recorder?

Xbox Game Bar Recorder is a built-in application for Windows.

◆ It has Spotify integration.

◆ It has a meme creation functionality.

◆ It allows you to record your screen.

◆ It can capture your screen.

◆ It illustrates the performance of your computer.

◆ It has Xbox Social.

◆ It shows you the resources, such as the top tasks and their impact. 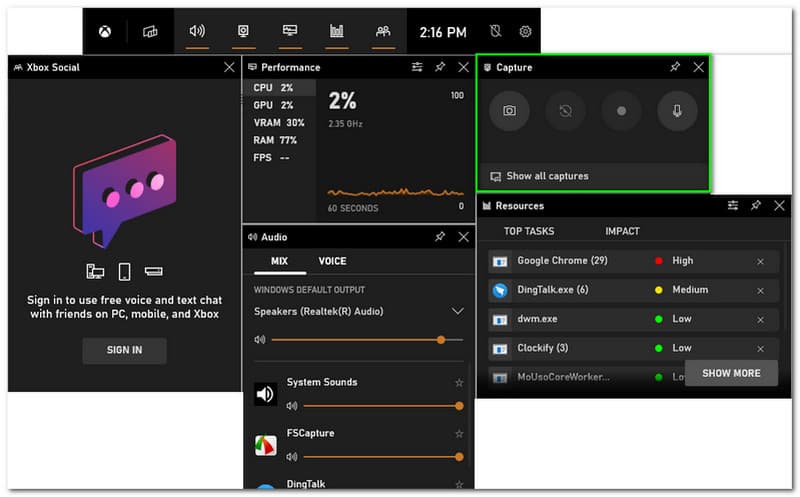 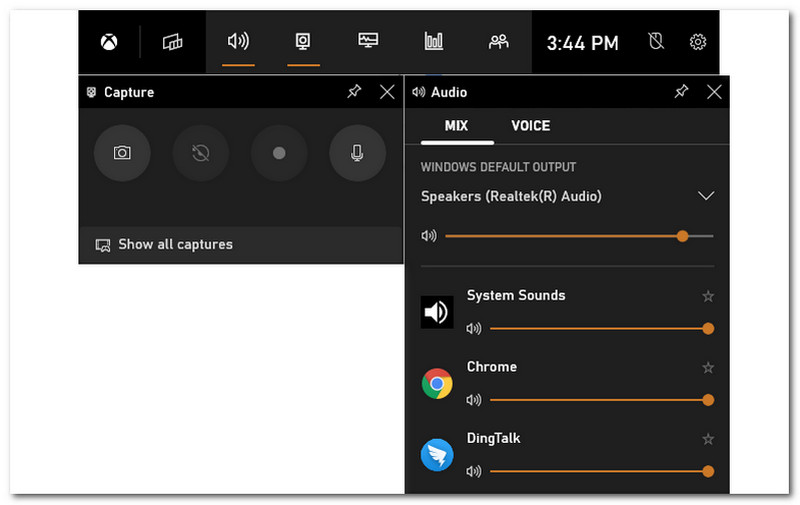 Before the recording process, you need to remember that the Xbox Game Bar Recorder can record only one window panel at a time. For example, the last window you clicked will be recorded. Also, you are not allowed to record a new window when you start the recording process, and it cannot record your entire screen. Therefore, you cannot record your File Explorer and your Desktop, and other applications like Maps.

So, to record your screen using Xbox Game Bar Recorder, you have to open an application you want to record. To give some tips, please minimize the unnecessary windows so that you will not record the wrong application. Another thing, avoid excessive noise so it will not cause distractions while recording.

Hit the Windows Key plus G, and the Xbox Game Bar Recorder will open. You have an option to click the microphone button to allow external audio recording. With that, you can do a voiceover and add a commentary. Then, if you are now ready, select the Record button and start the recording process.

Furthermore, here is another way to record an application supposing that all the setting options are set. You simply press the Windows plus ALT plus R. After that, it will start the recording process without going to the main interface of the Xbox Game Bar Recorder. 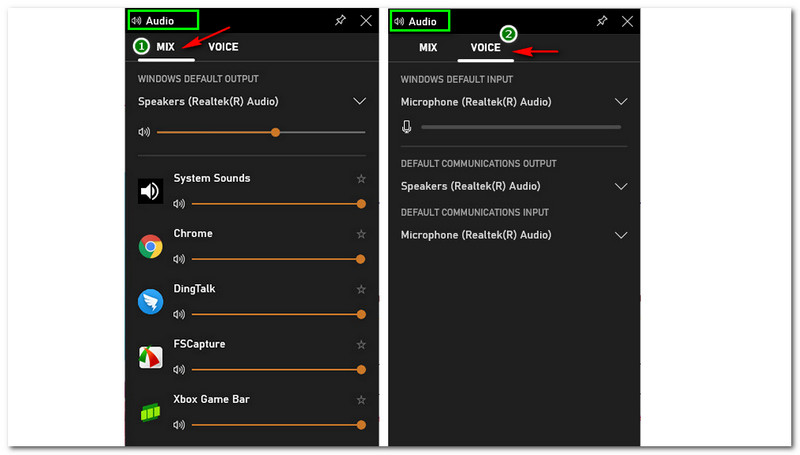 The audio of Xbox Game Bar Recorder has two types; Mix and Voice. On the Mix part, you have a choice to increase or decrease the volume of Speakers (Realtek(R) Audio) from 0 to 100. Furthermore, you can also adjust the importance of the System Sounds from 0 to 100 and the open applications that you can see on the screenshots provided, such as Chrome, DingTalk, FSCapture, and Xbox Game Bar.

Xbox Game Bar Recorder has a feature that can check the performance of your computer. As you notice the small panel, the Performance shows you the percent of CPU, GPU, VRAM, RAM, and FPS. Then, on another panel, the Performance Options lets you change the Graph Position to left, right, and bottom. In addition to this, you can pin the theme, enable the Override Default Transparency, and adjust the Backplate Transparency. Also, you can change the color of Accent with the choices of yellow, cyan, purple, white, red, amber, and green. 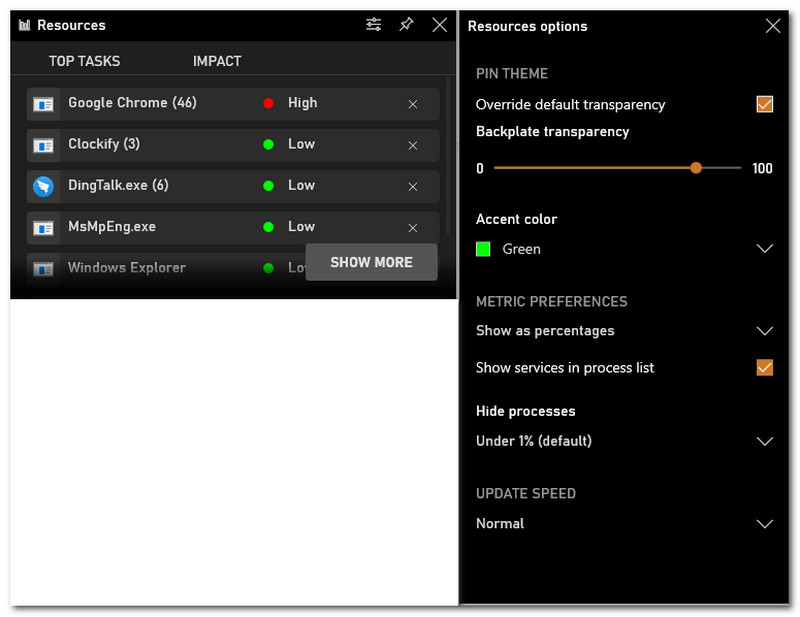 On the Resources, you will see the Top Task and Impact. As you can see on the image that we provide, one of our top tasks is Google Chrome, and its impact is high. Second to that is Clocify and its impact is low. On the other hand, the next panel contains Resources Options. Again, you can enable the Override Default Transparency and adjust the Backplate Transparency from 0 to 100. In addition to this, you can change the Metric Preferences into Shows as Percentages and Shows as Values. Also, you can enable the Show Services in the Process List.

Moreover, you can hide processes under 0.5% to under 20%. Or, you have an option to show it all. Lastly, you can set the Update Speed from Low to High. Or, put it to Paused.

Why is the Xbox Game Bar not working on an audio device?

Suppose that your audio device is not working. You can check your audio device to see if it is compatible with your computer. After that, you can connect it and ensure that the Xbox Game Bar Recorder will recognize it. Next, click the Windows key plus G to open the Xbox Game Bar, hit the Setting, and click the Party Chat. Next, look at your device in the Input and Output selection boxes.

Can I record my entire screen using the Xbox Game Bar Recorder?

Yes. For PC or computer games mode, Xbox Game Bar won't let you see the Game Bar. However, you can press the Windows key plus ALT plus R. Then, it will start the recording process. After that, you will see the recorded file when it completes.

My shortcuts on the Xbox Game Bar Recorder are not working. What is the problem?

Some of the shortcut keyboards might not work while recording a game. Try this option, check the updates of your Windows, and install the latest version of Xbox Game Bar. 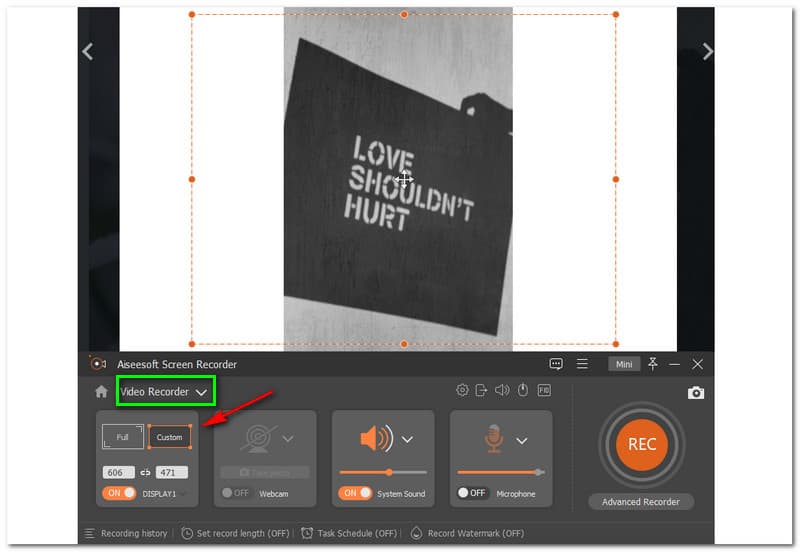 Aiseesoft Screen Recorder has additional features such as audio, webcam, phone, and more. Overall, both recorder software is easy and excellent to use. But, if you are not recording a game and just want to record your screen for tutorials, teaching, etc., we highly recommend you try Aiseesoft Screen Recorder. It offers a free trial, and you can also download it for free!

To conclude, as you notice in this article review, we focused on the video recorder of the Xbox Game Bar Recorder and its additional features. Also, we provide questions, answers, and alternatives. We assume that you learn a lot with this review. See you at our next one!

Capture every moment in desktop, browsers, programs and webcam.